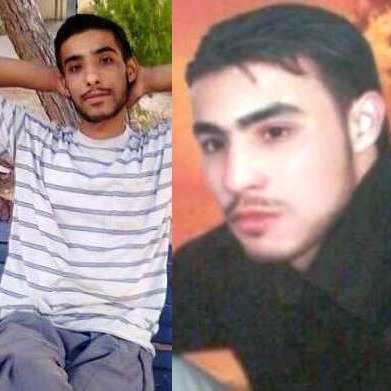 On March 11, 2012, Imad Al Ammar disappeared after escaping a massacre committed by a group of shabiha“militias” in the neighbourhood of Karam El Zeitoun in the Homs governorate, Syria. Imad’s brother, Alaa, disappeared eight months later, on November 27, at a checkpoint near the train station of Mheen in Homs. Since their arrest and abduction, their fates and whereabouts have never been clarified by the authorities.

On March 11, 2012, a group of Shabiha “militias” committed a massacre in the Karam El Zeitoun neighborhood, where Imad and Alaa Al Ammar were living with their family. On the day of the massacre, all family members, except for Imad and his father, were outside of Homs.

According to witnesses, Imad Al Ammar was hiding with four of his friends in water tanks located on the rooftop of the building where he was living. When the massacre was over, they left these structures and were immediately arrested by Syrian Military Intelligence forces. One of Al Ammar’s friends then informed Al Ammar’s family of what happened, after he was released a few months later.

After the massacre, dozens of bodies were found stabbed and burned, including those of 26 children and 21 women. Almost two weeks later, on March 26, 2012, the director of the Homs Branch of the Syrian Military Intelligence called the families of victims who were believed to have been killed during the massacre and asked them to identify the bodies at the National Hospital of Homs. Al Ammar’s family went to the National Hospital and was only able to identify the body of Al Ammar’s father.

After the massacre, the Al Ammar family then moved to the town of Mheen in Homs. A few months later, on November 27 2012, Imad’s brother Alaa was accompanying his younger sister on a visit to their uncle’s house, when he was stopped at a checkpoint controlled by the Syrian Military Intelligence, near the train Station of Mheen. There, he was arrested and abducted, while his younger sister was left alone.

Imad and Alaa Al Ammar’s family believe that they were arrested in reprisal for not joining the obligatory military conscription. The family also believes that Alaa Al Ammar’s arrest may have been related to his weekly participation in peaceful protests against the Syrian government in Homs every Friday.

The Family also tried to locate Imad and Alaa by informally contacting official contacts who then confirmed that they are still alive, but they could not identify the place of their detention.

In August 2018, Al Ammar’s family obtained a copy of Imad and Alaa’s civil registry record, which suggests that they are still alive. In the last few years, the Syrian Civil Registration Offices have reportedly issued death certificates for people who have been subjected to enforced disappearances.

On September 25, 2020, MENA Rights Group requested the intervention of the UN Working Group on Enforced or Involuntary Disappearances and urged the Syrian authorities to take urgent action to locate the two brothers and place them under the protection of the law.

September 25, 2020: MENA Rights Group requests the intervention of the UN Working Group on Enforced or Involuntary Disappearances.
September 2019: Imad and Alaa Al Ammar are seen at Sednaya prison by a former detainee, who later informs Al Ammar’s family.
August 2018: Imad and Alaa Al Ammar’s family obtains a copy of their civil registry record.
November 27, 2012: Alaa Al Ammar is disappeared at a checkpoint near the train Station of Mheen town in the Homs governorate.
March 26, 2012: Imad Al Ammar’s family goes to Homs’ National Hospital and are only able to identify the body of Al Ammar’s father.
March 11, 2012: Imad Al Ammar is disappeared after surviving a massacre committed by a group of Shabiha “militias” in the Karam El Zeitoun neighborhood of Homs.