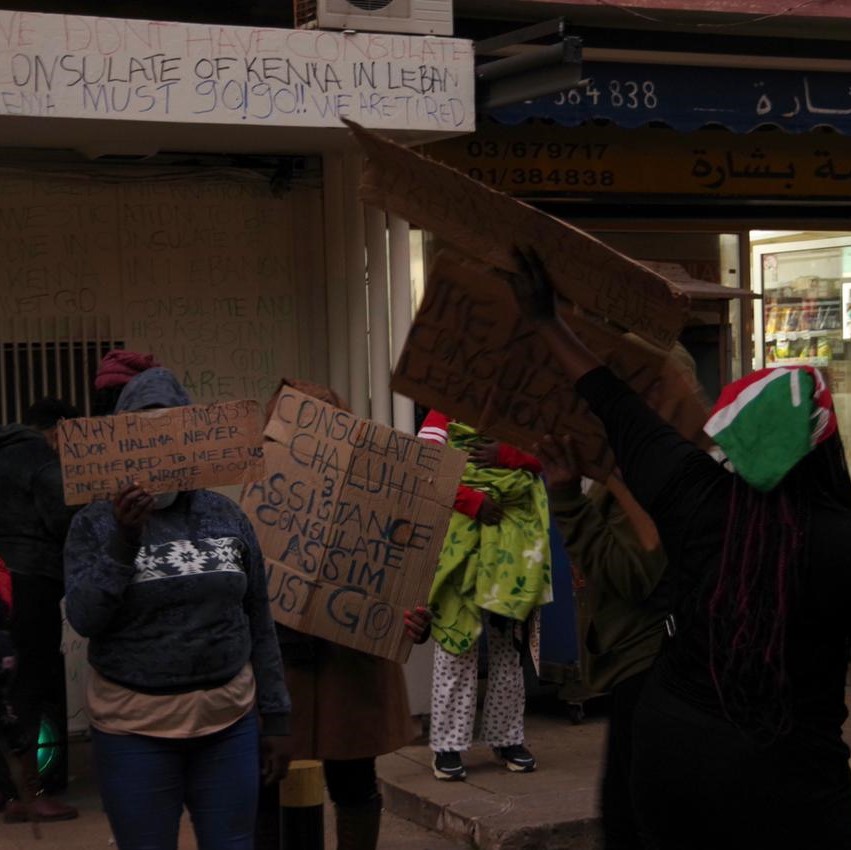 NM is a Kenyan domestic worker and asylum seeker currently detained in Lebanon and at imminent risk of deportation to her country of origin. Before she was arrested by the General Security Office (GSO) in April 2022, NM was a vocal advocate for the labour rights of migrant domestic workers in Lebanon. In early 2022, she took an active role in the protests that were held in front of the Kenyan honorary consulate in Beirut, where serious wrongdoings have been reported. In early August 2022, the GSO tried to forcibly return NM to her country of origin, despite the fact that she requested asylum in Lebanon. She was released in October 2022.

NM is a Kenyan domestic worker and asylum seeker residing in Lebanon. On April 4, 2022, she was arrested by the General Security Office (GSO) on the grounds of her irregular status.

Although NM introduced a request for international protection before the United Nations High Commissioner for Refugees (UNHCR), the GSO attempted to forcibly return her to her country of origin in early August 2022. The deportation was halted due to the commotion caused by Anti-Racism Movement staff and bystanders, as well as resistance from NM.

Before she was arrested, NM advocated for the labour rights of migrant workers in Lebanon and has played a leading role in the protests that took place in front of the Kenyan Consulate in Beirut demanding repatriation of Kenyan workers wishing to go back home and adequate support from the Consular Staff.

Among the demands raised by the demonstrators was the replacement of the consular staff members who have been accused of several wrongdoings. It has indeed been reported that the honorary Consul and his assistant created a climate of fear and distrust as a result of their alleged predatory practices against Kenyan nationals, mainly female domestic workers, that sought the assistance of the consulate.

Many accounts of abuse of power and mistreatment have been reported, including the extortion and exploitation of undocumented women who seek to return to Kenya, as many claim to have been overcharged for essential consular services as well as encouraged to pursue sex work in order to cover these expenses.

NM's deprivation of liberty seems to have been directly linked to her activities as an advocate for migrant workers’ labour rights, amounting to a violation of her rights to freedom of expression and freedom of assembly. Her deprivation of liberty may also have a chilling effect on others who work to ensure equal rights and protect domestic migrant workers in Lebanon.

Given that NM has sought international protection before the UNHCR, the forced expulsion of NM to Kenya would have constituted a serious breach of Lebanon’s non-refoulement obligation.

On August 15, 2022, MENA Rights Group and the Anti-Racism Movement submitted an urgent appeal to several UN Special Rapporteurs, calling them to urge the Lebanese authorities to put an end to the deportation proceeding faced by NM.

NM was finally released in October 2022.

August 4, 2022: The GSO tries to forcibly return NM to her country of origin.

April 2022: NM introduces a request for international protection before the UN High Commissioner for Refugees (UNHCR).

April 4, 2022: NM is arrested by the General Security Office.

January 2022: Weeks-long demonstrations are held in front of Kenya’s honorary consulate in Beirut.

September 8, 2022
Disappearance of Lebanese national after the April 23 shipwreck off the coast of Tripoli