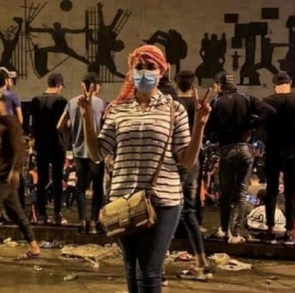 On November 2, 2019, human rights defender Saba Al Mahdawi was heading home after attending a demonstration in Baghdad’s Tahrir Square when she was suddenly abducted by unknown men. She was released on November 13, 2019.

Saba Al Mahdawi is a volunteer medic and woman human rights defender who had been volunteering at the anti-corruption demonstrations, which initially began on October 1, 2019. According to Front Line Defenders, she was helping provide food and water to the protesters, and offered medical assistance to those who were injured. She had also been collecting donations for medicines, and assisting those with severe injuries so they could be transferred abroad for medical attention.

On November 2, 2019, Al Mahdawi joined an anti-government held in Tahrir Square. At around 11: 20 p.m., she was heading home when her car was stopped in the Bayaa area by three vehicles containing several masked and armed men. They aggressively removed her from her vehicle, confiscated her phones and took her to unknown location. The arrest was witnessed by other demonstrators also heading home who provided the authorities with the license plate number of the car that drove her away. No action was immediately taken. Her family has submitted a complaint to the Iraqi police, but to no avail.

The Iraqi Human Rights Commission, Iraq’s national human rights institution, confirmed on November 3, 2019 that Ms. Mahdawi had been abducted the previous evening, but did not say who seized her. The Commission urged security forces to investigate the matter and other "organised kidnapping operations".

Although Al Mahdawi's family has not received any information concerning the perpetrators responsible for her enforced disappearance, they believe that she was abducted by Iraqi security forces or by a militia acting with the authorisation, support, acquiescence or approval of the state. The rising number of similar abductions that have been recently reported in the capital is indicative of a pattern of enforced disappearances directed against peaceful anti-government demonstrators.

She was eventually released by her captors on November 13, 2019.

On October 1, 2019, protests started in Baghdad and southern cities calling for improved services and more action to curb corruption. The demonstrations were met by excessive and unnecessary lethal force by Iraqi security forces. A public report published on October 22, 2019 reported 157 deaths, most of whom were demonstrators.