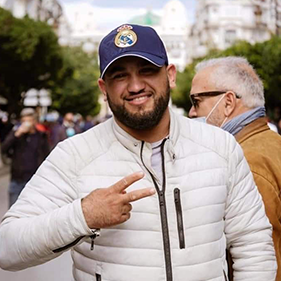 Lire la page en français
Zakaria Hannache is a human rights defender who has been facing charges in Algeria since February 2022, including for “praising terrorism” and “undermining national unity”. The charges come in reprisal for his work documenting and publishing information on the arrests of prisoners of conscience. After being imprisoned for several weeks in Algeria and being released on bail in March 2022, Hannache continued to be subject to acts of intimidation and pressure. As a result, he travelled to Tunisia where he obtained refugee status from the United Nations High Commissioner for Refugees. Despite this, he remains at risk of deportation to Algeria.

Zakaria – also known as “Zaki” – Hannache is an Algerian Amazigh human rights defender. Since 2019, he has been documenting the arrests and prosecutions of prisoners of conscience, particularly in relation to the peaceful protest movement known as Hirak. He became one of the main sources of information on the arbitrary detention of prisoners of conscience in Algeria, for local and international civil society, as well as for the UN human rights mechanisms.

On February 18, 2022, Hannache was arrested at his home by plainclothes police officers and taken to the police station on Dr Saadane Street in Algiers. An arrest warrant and a search warrant were presented by police officers, who searched his house and seized his phone. They also looked for an award he had received for his work in December 2021 and the financial reward that had accompanied it.

On February 24, 2022, Hannache was brought before the investigating judge at the Sidi M’hamed Court and charged with, among others, “praising terrorism”, “receiving funds from an institution inside or outside the country” and “undermining state security”. He was placed in pre-trial detention the same day.

On March 7, 2022, Hannache began a hunger strike to protest the arbitrary nature of his detention, which he ended when he was conditionally released on March 30, 2022. After his release, Hannache continued to face significant intimidation in Algeria, prompting him in August 2022 to travel to Tunisia where he sought medical support.

On November 9, 2022, Hannache was informed that he was summoned by the investigating judge to appear before the court of Sidi M’hamed in Algiers for a hearing scheduled for November 13. The next day, he applied for asylum with the UNHCR in Tunisia.

On November 13, 2022, Hannache’s lawyer filed a request for postponement of the hearing on medical grounds, which was granted. Hannache was informed that the Tunisian police came looking for him at two different locations in Tunis over the next two days, raising fears that they were trying to arrest him.

Tunisian authorities must under no circumstances repeat the dangerous precedent set by the kidnapping and refoulement of Algerian refugee Slimane Bouhafs on August 25, 2021, about which no investigation has been opened to date in Tunisia. For this reason, on November 28, 2022, MENA Rights Group and a Tunis-based human rights researcher submitted a request for interim measures to the UN Committee against Torture, citing a possible violation of the principle of non-refoulement should Tunisia return Hannache to his country of origin. On December 5, 2022, the Committee asked Tunisia not to expel Hannache while the request is being examined.

December 5, 2022: The UN Committee against Torture calls on Tunisia to take interim measures to prevent the forced return of Hannache to Algeria.
November 28, 2022: To avoid possible irreparable damage to Hannache, MENA Rights Group and a Tunis-based human rights researcher submit a request for interim measures before the UN Committee against Torture, invoking a possible violation of the non-refoulement principle by Tunisia.
November 18, 2022: Hannache is granted refugee status by the UNHCR in Tunis.
November 16, 2022: The investigating judge decides to drop the terrorism charge against Hannache, a decision challenged by the Prosecutor.
November 14-15, 2022: Hannache is informed that Tunisian police came looking for him in two different locations in Tunis raising fears that they were trying to arrest him.
November 13, 2022: Hannache’s lawyers introduce a request for postponement of the hearing on medical grounds.
November 10, 2022: Hannache applies for refugee status with UNHCR in Tunis.
November 9, 2022: Hannache is informed that he is summoned by the investigating judge to appear before the court of Sidi M’hamed in Algiers for a hearing scheduled for November 13.
September 15, 2022: The Special Rapporteur on human rights defenders and the Special Rapporteur on the promotion and protection of human rights and fundamental freedoms while countering terrorism express “serious concerns” about his arrest and detention, as well as “the charges against him, which appear to be directly related to his work as a human rights defender”.
August 2022: Hannache travels to Tunisia for medical treatment.
March 30, 2022: Hannache suspends his hunger strike and is provisionally released.
March 7, 2022: Hannache begins a hunger strike to protest the arbitrary nature of his detention.
February 24, 2022: Hannache is brought before the examining magistrate at the court of Sidi M’hamed, who places him in pre-trial detention.
February 18, 2022: Hannache is arrested in Algiers.

May 20, 2019
Mohamed Guefassa remains missing since 2016 arrest by Tunisian coastguard